And all thanks to the new "I just had surgery a month ago and then a second surgery a week later since the first surgery got infected and now I have to spend 6 weeks on I.V. antibiotics"... diet ™! 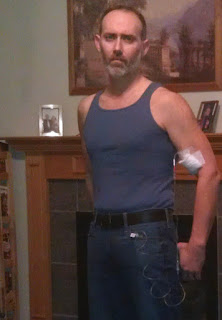 Recently, a daughter who is obviously a terrible, terrible person but shall remain nameless, referred to me as "gaunt" and "sick looking". RUDE.

I know when it rains, it pours... I just wish some of this stuff coming down on my head was water.

I am sure some of you were hoping, "FINALLY! Something horrible enough has happened to him that he'll shut the hell up and not blog about it!" WRONG.

And a couple others of you have told me over the last month, "you NEED to blog about this!" in regards to all the recent medical mishaps.

I only have hesitated up until now for two major reasons:

C) So far, this has been such an escalating comedy of errors (a full-on C.F., you might say), I am afraid to joke about it. I'm worried that will just further incur the wrath of Loki or whoever is his equivalent in charge of tormenting North Americans / Oregonians

Yes, I know I said only two major reasons, please refer back to letter A.

About a year ago, I was diagnosed with a stage-4 piece of crap shoulder that hurt like hell and wouldn't get better. The MRI showed that it had arthritis, bursitis and tendonitis and other things (probably ending with "-itis") that the doctors wouldn't even know about until the surgeon got in there.

Within a few short months, I was on the table with the anesthesiologist having me drift off on some really... just... really amazing stuff and with me wearing nothing more than a large bandana with peekaboo openings on all 4 points of the compass.

The last thing I remember were bright lights and the faint sound of faraway laughter and Tom Hiddleston speaking in Old Norse. 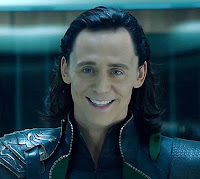 I need you to count backwards from 10...

When I first woke up, I was feeling surprisingly good (my medical chart says I had quickly been upgraded to "groovy" condition), despite missing one of my most important arms.

OK, technically it was still attached, but they had given me a nerve block in my neck to help with the post surgery pain. For the next 24 hours, that made the right arm almost completely paralyzed and me regretting I had not practiced becoming more ambidextrous with wiping. (Luckily the thunderous constipation made this less of an issue).

The doctor ended up removing the distal portion of the clavicle (type of old fashioned piano), as well as detaching the bicep tendon and reattaching it to the bone with several titanic screws and lastly, finding and repairing a rotator cuff tear that never appeared on the MRIs. Hahaha, surprise!

A thousand downsides to the unexpected rotator cuff repair is I can't even lift my right arm for 6 weeks. The only upside is when Amy asks me to put the dishes away, I can just rub my shoulder like Danny Kaye in White Christmas.

After the pain gradually lessened for the next 10 days and I ran out of days to take off at work, it was necessary to head back to the corporate world.

Driving 60 miles a day with one arm is challenging and a little frightening for those swerving out of my way, but fortunately the groovy pills tend to mostly drown out their screams and horns.

So I was able to get back to work... but only for a couple days before the ominous music started playing in the background (those #$%* cellos!).

The arm suddenly started swelling, broke out in a rash and the pain on a scale of 1 to 10 shot up to a full "Spinal Tap" level of 11.

They tried to draw some fluid for cultures by sticking a hundred-foot long needle into the shoulder joint (A.K.A. "aspiration... hurts like Satan"), but unable to do so, they still stood by the diagnosis of an infection to the original surgery site.

They recommended a second surgery to wash it out and then follow up with just a super quick 6 weeks of I.V. antibiotics.

The 2nd surgery and hospital time was a little more of a blur than the first one. Less pleasantries were exchanged with the orderlies and disorderlies than at the surgery just a week previous. The peekaboo bandana was purple this time.

One by one, all of the new nurses still asked me if anyone has ever told me I look like Nicholas Cage. Either too weary or medicated, I was now reduced to simply answering, "who?".

This time it was not "day surgery". I had to spend several days and nights in the hospital. When was the last time YOU got to wake up to the sound of a complete stranger throwing up on the other side of the room or peeing into a Tupperware pitcher? Most people have to go on a Carnival Cruise to enjoy that! 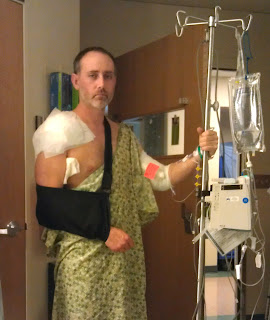 Getting dolled up to go over and meet my new roomie, Captain Pukes-A-Lot!

Part of the reason I had to stay a few nights is so they could install a PICC (a type of portable I.V. line) into my left arm that runs from there through my chest and just outside the superior vena cava of the heart. I paid poor attention in science class, but I think these are real anatomy terms.

This catheter location drops the antibiotic into a sort of "raging river" of one of the biggest blood flows and biggest veins in the body. This is necessary because the antibiotic needs to be immediately diluted, since it is as caustic as a mixture of bleach and battery acid and that stuff the Alien drools. Medicine! It's good for you!

I even got visit from the head of the hospital's Infectious Disease department. At least she did not say they were writing a screenplay about me or refer to me as "Patient Zero". 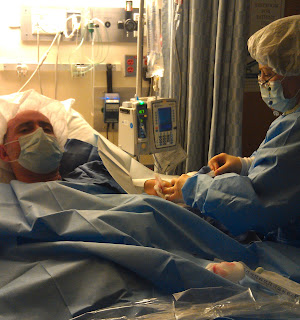 I need a central line put in! Stat!

I know I make it sound like a lot of fun and like nothing at all went wrong, but we did run into a little snag at this point.

Unfortunately, one of the nurses proceeded to put the battery acid... I mean, medicine... into the wrong, peripheral I.V. (smaller vein), instead of the proper PICC line they just put in. Three times over the next 24 hours.

I only noticed it after they began to unplug everything for me to be released to go home. When I pointed it out, she clarified and partly made up for this mistake by sharing, "oops, why the heck did I do that?"

So, that was nice. They were once again rivaling the concern, professionalism and misplaced body fluids that are usually reserved for a Carnival Cruise.

At home just 12 hours later, my left arm vein turned bright red and the whole arm swelled up. Then the vein turned hard as a piece of rope and felt like it had been smashed with a crowbar.

This is known as phlebitis. Yet another "-itis"! Coincidence?

And this was caused by the same medicine that I am still dripping directly into my heart for 90 minutes straight. Every 8 to 12 hours. For a brief 6 weeks. 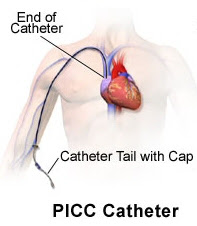 Medical science doesn't need to only be expensive or disgusting. Now it can be scary too.

The antibiotic is so caustic and potentially toxic, I have had to go into the hospital every single day for the last week and almost every day for the last month. If I am not getting a dressing change or the I.V. line is not slipping and needing adjusting, they are doing one of their biweekly to triweekly blood draws to carefully monitor the antibiotic blood levels. If it goes higher than the exact range it needs to be in, the side effects are:

Just 4 more weeks of this nightma... medical wonder. More than anything, I just want no new developments. I really would love to have nothing new to blog about for the next month.

And I wish I could jump off a diving board into a bottle of 12 year single malt and forget about all this, but I have to wait until the pain level gets below the perception of my shoulder actually audibly screaming profanities. Then I can finally stop taking enough of these stupid groovy pills to stun a charging rhino.

I honestly can't wait to go back to blogging and being a smartass about much more mundane things, like my Corgis.

I might even get a 3rd one and name him Loki.