On this day June 6th, many decades ago and before I was even born, some of the most powerful forces came together on a famous beach to make history in such a way the world would never be the same.

Sure, this is also the day of World War Two's historic D-Day invasion even more years ago, but I'm of course referring to the day Paul and Paula Shene tied the knot in Westhampton Beach, New York in 1965. 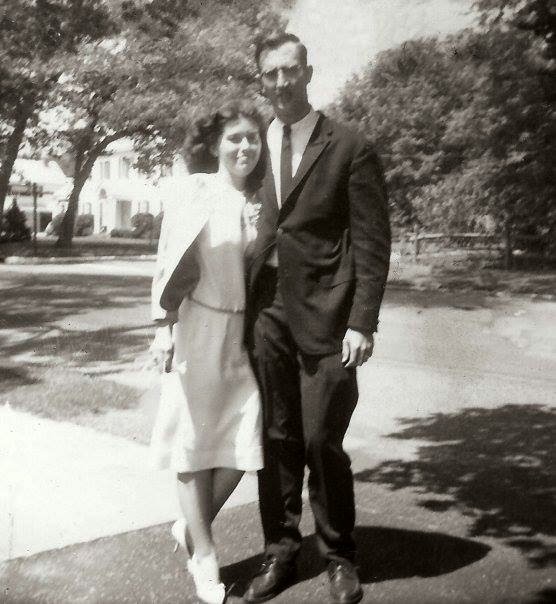 A good looking couple who would go on to to create at least
one even more attractive person. Science.

Celebrating today their 49th anniversary, their almost half-century milestone is nearly twice the quarter-century anniversary that their good looking second born son and his beautiful wife just celebrated a few months ago.

I am not good at math, but I think I am catching up.

It is often jarring for me to see how my beautiful mom looked so much like my daughter today, just a few years younger than her granddaughter is now.

After securing my genetically modified attractiveness (GMA), I only spent 18 years with them before being gently encouraged to get (the hell) out of the nest, but a lot was crammed into those less than two decades.

Not long after this photo, my father joined the Navy and by the time I was three, we had moved from New York to a base near Chicago. A year later, we were on another naval base near San Francisco.

There was a lot of love in our household despite many bumps along the way.

Just a few years later my dad was honorably discharged after an injury and then his training as a special education teacher took us to a North Dakota Indian reservation where we spent a full year for one eternity.

We had some tough times. Far more than a petty blog could ever share.

Wedding vows are smart enough to include richer AND poorer, in sickness AND health. You will have both.

Call it the small print.

In the future they will probably have DNA based computer simulations to show people exactly how much medical problems our spouses will have, including hair loss, but luckily for now the "I do" is still a leap of faith.

As the years passed, my folks  and us kids would arrive back to live in New York where I got into most of my trouble, then Florida and then again Oregon, hitting 45 states along the way, most of which we Shenes are still legally allowed to re-enter.

They would move us cross country or to new states a total of six times before my mom's great aunt passed away. They have since moved to New York one more time, leaving two of their three offspring 3,000 miles behind on the west coast, mostly able to fend for ourselves.

However long you are tethered to your parents, it takes even more decades to appreciate the permanent influence of their upbringing and character or your desperate attempts to identify yourself outside of them.

My mother's love for drawing and painting and my father teaching me to play guitar and banjo when I was five are still hard to shake. The passion my mom gave me for respecting others different from myself and that which my dad gave me for expressing myself through writing (much against my will) is even more lasting.

One of my greatest heartbreaks is the decline of my father's health over recent years. My own health issues over the last few decades has reminded me to value the relatively short time we have here. Some things you have to experience firsthand.

A lot has changed in the world since the moon landing less than 5 years after the black and white picture above. I was less than a year old when we landed on the moon, so I didn't care about it much at all.  But at the time, nobody envisioned all our technological leaps, including the ability to keep our rambling diary entries permanently blogged for future generations to read. Or ignore.

What has not changed is a willingness for two people to find each other and devote the rest of their lives together. Through often unspeakably painful times and other many more amazingly wonderful ones.

I love you mom and dad. Happy anniversary.