This season, let's remember to keep Christ in Christians!


I can imagine some awkward silences at the great judgement...

---
Jesus:  "Come, you who are blessed by my Father; take your inheritance, the kingdom prepared for you since the creation of the world!  You there... when I was hungry and thirsty, naked and in prison, did you feed and clothe me and visit me?"

Church goer:  "No, but I did vote 'NO' on the gay marriage amendment! Remember?  Bumper sticker and everything!"

There are some of my Christian friends who will laugh at this, because they have a sense of humor but especially because it also makes a point. I have others who will just be a little annoyed and then even others who worry that it fulfills Revelation's warning and of adding to his words and that I'll burn for that joke alone. 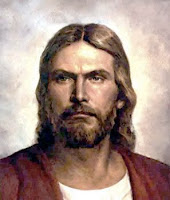 Angry Jesus is not amused...

Regularly I will point out that I consider my Christian faith the most important thing in my life and I'd like to think at least half of my Christian friends are standing firmly behind me waving their hands frantically and saying, "Psst! He's not with us!"

I am of course a terrible example of a traditional American Christian. I pray every day and regularly read the bible, but I do not go to church nearly enough and I smoke and drink, cuss like a longshoreman and frankly look like a smelly hobo with this ridiculous beard.

But over three decades ago, I went from boldly proclaiming myself an atheist and proudly "hating any God if He ever did exist" to suddenly having a series of events and experiences that gave me little choice but to change my mind.

I had what is typically described in secret Christian jargon as a "powerful encounter with the Lord" that forever changed my viewpoint.

The way I try to describe it is if you have ever met and shook hands with me, you would have an easier time telling yourself and others that "Pat does not exist" than I would have convincing myself I did not have that powerful encounter™ with Him.

One of the most persuading factors that His presence is real was my immediately going from being filled with anger and hatred to having overwhelming joy, peace and especially compassion and grace for those I would normally believe did not deserve it.  I had a very violent upbringing and I now had the ability to care about others besides myself.  For me, it was undeniably miraculous.

It might seem like I am touting my credentials, but in reality I simply share my testimony whenever the topic comes up.  It is something I try to never hamfistedly ram into every conversation, but also am never ashamed to share.

But in the last 30 years, one thing I have learned about us as Christians is that we are often a bunch of idiots. Yet that is only because all humans are consistently idiots and the vast majority of us Christians are arguably human.

So every foible and flaw that a human can have, we proudly drag like worn out suitcases into our Christian lives and often even into the very character and statements of our movements and churches.

That is one of the great things about Christianity - any religion really - if you shop around enough, you can always find a church that allows you to love or hate people exactly as much as you want to.

Do you hate gays? Do you want to see them burn? There is still a church just for you!  You may have to use some of your spare time to picket random funerals, but the Westboro Baptist church is still accepting membership applications.  (Yes, their website is literally godhatesfags.com, that is not a typo.) 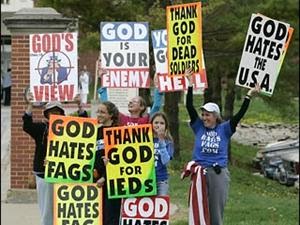 But  if you find it extreme and wrong to carry signs saying God Hates Fags, and yet you still kinda find gays, well... to generally be creepy and gross and would just rather never see or talk to them... don't worry! There are plenty of other less televised churches still available!

Despite our proclamations of faith in the grace of God, one human trait we usually bring with us into the church is our assurance of being the most right while others are wrong. In fact the wisest Solomon told us that, "every way of a man is right in his own eyes: but the Lord pondereth the hearts."

The great lengths we go to insist we are more right than others can be seen in the bible's first recorded religious man, Cain.  Needless to say, when his church service was shut down, he had a bit of a poor reaction and decided to commit the first fratricide.

When you see such a great disparity of character and message in hundreds of denominations or movements even though they all say they "only believe in the bible", it can be a bit confusing.  But do not blame that on religion versus the fact we humans are dummies.  As "verse interpretation" goes, about 300 million of us humans still cannot even agree on the meaning of the 2nd amendment.

So the argument rages on within the church over many things and is not likely to end soon.

Recently, a famous duck caller named Phil Robertson who has sometimes compared himself to John the Baptist (his beard, definitely NOT his bank account) has stirred up some arguments within the Christian community by saying, "Start with homosexual behavior and just morph out from there. Bestiality, sleeping around with this woman and that woman and that woman and those men."

This piercing insight was just his analysis by the way.  Do not assume he meant us to take his poor grammar and sentence structure as advice and step by step instructions!

Not convinced he had charmed the magazine interviewer and future audience enough, he followed up by clarifying, "It seems like, to me, a vagina—as a man—would be more desirable than a man’s anus. That’s just me. I’m just thinking: There’s more there! She’s got more to offer. I mean, come on, dudes!" 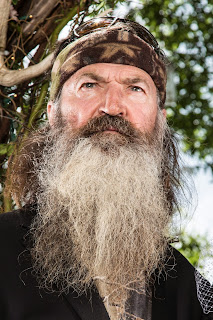 Like John the Baptist, probably also would eat locusts along with ducks and beavers

Whether we disagree or agree with the first statement comparing homosexuality to bestiality, the second part Pastor Phil shared about vaginas was clearly difficult for many of us to refute.

So millions of Christian men were forced to admit they "completely agree with the second statement but OMG why the hell did you just say that out loud?"

But with little in between room, Christians quickly rallied to either calling him a ding dong or our next President.

And thus the argument rages on in the American church about either hating or loving gays. Typically the mainstream "compromise" is to say we technically love them, but while finding them repulsive and avoiding them.

(A common tactic to show people the importance of God's holiness and judgement is to kick people out of our circle and stop talking to them until they get their shit together.  This is a tried and true method that literally never works, but we think we almost have it down.)

I do not think Phil Robertson is the same as Westboro. I do not lump them together, but I do try to point out the degrees and shades of disgust and intolerance we are proud to call words and actions that are "like Jesus".

Personally, I do not think Phil Roberston hates gays at all. I think like most Christians he just finds them and/or what they do to be disgusting.  He probably has never met one!

It would seem difficult to do so wading through the swamps of Louisiana. Or if he has met one, that person has apparently learned to still keep their mouth shut and get back in their shack's closet.

I spent most of my first year married in ministry as the head counselor for a Christian men's rehabilitation home in Florida, modeled after and branched off of Teen Challenge. For many years, I spent hours every day reading and studying the bible.

It took a while before I cut through my own religious nonsense to realize we pay lip service to believing in grace and that the greatest pitfalls for every one of us Christians are religious self-righteousness, judgement and condemnation.

Despite those sins of the heart obviously being mentally and spiritually poisonous, they remain so deliciously satisfying.  For some, they are Christianity itself.

Like most "mainstream" believers, I believe I am only saved by grace through faith. I believe Christ's death on the cross did pay for my sins and there is nothing I can do to add or take away from his sacrifice.

But merely saying that and actually believing and living like I really mean that is the hard part.

Wading through the hundreds of "thou shalt" and "thou shalt not" commands, I was fortunate to find focus and more than a small amount of freedom in a few of my favorite verses from the gospel of Matthew:

The next time you give (or refuse) a dollar to a homeless person, ask yourself if you actually love them as you love yourself. Ask yourself the same thing the next time you refuse to even talk to someone because of their political party, religion or because they are gay.

Like the 2nd amendment, I have a feeling we will be arguing over what these few verses in Matthew really mean for a long time to come.