We All Go Home Again


My mom just called me at work two hours ago to say that dad was in the ICU and just had a heart attack. She called yesterday to say he was already in the hospital, taken to the ER last week because he had gotten nicked from his catheter insertion. While there, he got pneumonia and it quickly spread from the lungs to his body.

I do not know how much more time he has. I would like to hope it is a while longer, but I also know he has suffered for so many years now, trapped in his body.  I think if he is ready, we will know. But it is still surreal to think that before long he will no longer be in this world anymore. That this world will have one less person, someone so near to me.

I can only do what he instilled in me so well, to write. I know we are all helpless in this, he being the most. I can only type in the vain attempt to yell out against it all.

As I just pulled up to my house, everything looked a little different. It isn't of course, it just feels that way. As I pulled into the driveway, I was reminded of a famous saying my dad told me when I was little, "You can't go home again."

I always thought it a bit ironic dad told me this so earnestly, as it was something which he obviously struggled with for so many years. He epitomized wanderlust from my earliest memories of him. I do not know if he felt this even as a young man, but it certainly was strong by the time we had left my birthplace upstate New York to move to the Great Lakes Naval base in Illinois when I was three. We moved just a year later to Mare Island Naval base in Vallejo, California. And then we moved almost every year after that, from California to North Dakota and New York again, to Florida and then Oregon.

Like so many, his saying that we cannot go home again was more of a sad resignation than an affirmation. He would often speak fondly of memories growing upstate New York and setting high school track records. And he wanted to go home.

We fled North Dakota, trying to escape the racism and physical abuse, as well as valiantly trying to outrun the substance and domestic abuse. I still remember the excitement we all had seeing his parents pull up to our temporary new home in New York. Even if only for a moment, we felt like maybe we were finally home again.

I do not know if the famous Wolfe saying began to cement more into his mind at this time, but we could not outpace whatever we were running from. I am grateful my parents stayed together through all the fighting and troubles, but we bounced every year to a new house on Long Island, hoping some peace could be found in yet another greener pasture. But it was never enough.

By the time I was 16, my dad told me we were moving to Staten Island, because he was afraid I would end up in jail or dead if we didn't leave. I swore to him I would disappear into the city and they would never see me again. After a short time, he convinced me to go with them to Florida instead, where his parents had moved. Once again, there was the excitement of seeing the grandparents and feeling like we were a little closer to home again. He bought me a plane ticket weeks before they drove down, because he said he was afraid I would not survive there that much longer.

On their drive down, they stopped in North Carolina, looking for the dad my mom had never met. They discovered his brother, who quickly called her dad in Portland, Oregon, to arrange a meeting. They warned me that he was a devout, born again Christian. I told them to warn him I was a filthy mouthed, pot smoking atheist.

I could write a book just about what happened in the next 24 hours, but I probably won't. I went from avowing there is no god and if he did exist, I hated him... to becoming a believer. I did not tell anyone for the first day, as it was so personal and hard to even believe, let alone explain. They woke to me ripping my confederate flag off the wall and dragging it, the bong that dad had gifted me, along with a garbage bag of everything else out to the curb. Then I told him we were going to go searching for my brother Paul, who he'd kicked out of the house weeks earlier for being a Christian. He said like hell we were and after a couple hours we were in the car and on our way. Just a few days after that, my dad sat with me in the living room and said the sinner's prayer. I made Paul lead him, since I sure didn't know what the hell to say.

And from that day on, every one of our problems miraculously didn't disappear! We fought as much as ever, trying to find purchase in faith and forgiveness, as ever unsure of our way. We continued to fight each other as dad and mom fought to keep the family together. I've written at length of the trials we endured and caused. I left their home just a few years later on the worst of terms, with broken doors and almost yet another bloody fistfight. All of it just months before I was to be married and move with Amy back to Florida, to enter full time ministry at the same drug rehab home I had spent time in myself.

When Amy and I came back to Oregon, there was still so much patching up to do between me and dad. And we did. So incredibly slowly and deliberately. My favorite memories of dad were in these years, spending time alone hunting and playing cribbage. And talking. Just talking. I've always loved being the class clown and if I could ever say something witty enough to make dad laugh, I had done my good deed for the day. And I knew there was a pride in his knowing so much of my weird sense of humor came from him. And we talked about our faith, with all its doubt and struggles. And they would worsen and deepen for me terribly as my health problems increased over the years.

But our faith remained. We discovered that you cannot go home again, but you must become home. I can only hope he knows how much of that he helped instill into me, despite all my unbelievable rebellion and independence.

Driving home in a daze this morning after getting the call, I thought about when grandma, dad's mom, had died. How he suddenly knew that bizarre feeling of someone so loved simply no longer being here. And then a few year's later he experienced the same feeling when his dad passed. That strange realization that you are now the patriarch, still not completely sure of your place in the world, while it is expected of you.

Dad lies unconscious in ICU right now, three thousand miles away from me, but surrounded by love. My mom, his loving wife of fifty years is by his side. Even while he was dragging us at least three times across country, never quite outrunning himself, he still fought to make us a home wherever he went. Mom is still tenaciously hoping and praying that he will recover enough to be released, as she promised him he could pass in their house and not a hospital.

Whatever happens next, dad is almost home again. 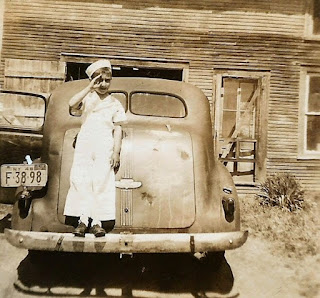