Newark is for the birds


If you've read my blog before, you know that I cover a wide range of topics from travel, working out and my dogs. But to not always be one-dimensional, I will also sometimes stray off into talking about going places, exercise and my pets.

I don't know why flying anywhere makes me want to write about it, but my guess is it allows me to vent about the nuisances and freak happenings as an alternative to punching someone, which is apparently still against the law in Oregon, New Jersey, Massachusetts AND Maine.

When I landed in Newark, New Jersey to get my connecting flight to Portland, Maine, I immediately could sense everything was smooth sailing and going my way, when the flights reader-board had a couple "Delays" here and there and just one huge, bold, flashing, red colored "CANCELED".

It was not followed by "JUST FOR PAT - LOL!", but it did have my connecting flight number, so I trudged over to United Airlines customer service where some of the brightest and most helpful employees in the world were nowhere to be found.

Fortunately, they did have a couple people who looked like they were rescued just in the nick of time from the soul sucking machine of The Princess Bride.

The gal who waited on me easily had several years of life left and was very helpful in clarifying that my flight was canceled because of "who knows for sure". She also said they at United, the biggest airline in the world, could very easily just print me a ticket for an alternate flight that I could never actually board, since there were no empty seats available.

And if THAT failed to work out, which she assured me it would, then there was one other flight to a completely different city and even state (but same country!) than the one I wanted to go to, if that would work out for me.

No, seriously... I have been to a few airports and that was the first one I had seen allowed birds to walk about so arrogantly. He stopped and tipped his head as if to say, "dude, she is not going to help you" and walked off. (I didn't ask if she saw the bird too, in case I had imagined it.)

I asked if we could still aim for landing somewhere in Maine, since that was the state with my co-workers and she said absolutely, they could definitely get me there a day too late for my meeting. So, we had options, is the thing.

I reluctantly accepted the flight change to Massachusetts, since it also started with an "M" and a two hour drive would give me time to try to relax and look up current state laws on punching people.

I had 5 minutes to grab a water and boxed salad (two words that together always = yummy!) and at the checkout register, I looked down to see another pigeon walking by. I say "another", but he might have been following me. 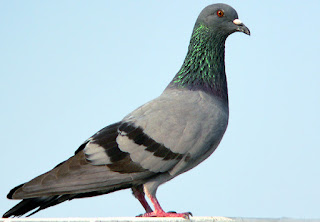 As I boarded the smallest plane that United owns (I think it was a 5 and a half seater), I walked to the very back where my half seat was located and I immediately understood why nobody had booked it. I have sat close to the airplane bathroom before, but this was actually IN the bathroom.

My unofficial job was to hand out toilet paper squares (no more than 2!) and to "avoid eye contact". They could only pay me in little bottles of scotch, so there was that one positive note. I also looked around, but there was a very noticeable lack of pigeons on board, which was a nice change.

As we started to land in Manchester, Massachusetts (a real place), I noticed all of the city's buildings had been replaced by forest, which instilled even more confidence and excitement in me.

As I walked up to the rental car desk, I said "you would not believe the day I'm having" and she assured me that "things can still get much, much worse, how can I help you".

She said she had no record of my reservation waiting in Maine to transfer over here. When she said their computers records were not interconnected at all, I asked her if she knew what their company name "National" means or the word "irony". I also asked if she had a sister in New Jersey or knew about their pigeon infestation epidemic and she called over the manager.

When the manager assured me that they would do their very best to explain they could not rent me a car, since I was a "walk-up", I asked if she was going to watch the Presidential debate that night and if she had any idea whether her own Governor Romney had finally lifted that pesky Massachusetts ban on punching people. She asked me to "please wait a moment".

She came back and said they could possibly rent me a mini-van, rickshaw or finally, a piggy-back on a homeless guy named Billy who was really good with pigeons.

Since it was still a two hour drive to Portland, Maine, I chose the mini-van and handed her my credit card and man card.

I did not get checked in and eating dinner until late, but I was able to have dinner in the hotel restaurant and relax at a table in the corner with just my quiet thoughts and the 4 big screen TVs blaring the Presidential debate.

Now that the business meetings are over, I have one more night until I fly down to JFK until tomorrow. The law of averages dictate that everything will go perfectly without another single problem.

I hope so, since it will be another 4 days before I get back to Oregon and can write about my dogs.
Posted by pshene at 11:17 AM