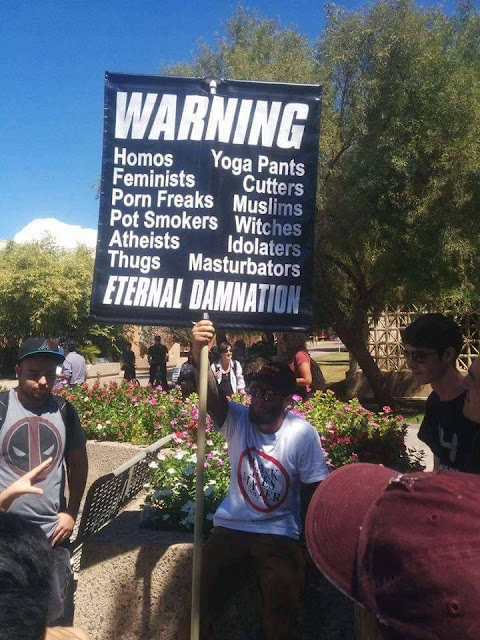 First of all, I want to thank you. As a Christian myself, I feel like many out there are doing and saying some terrible things that can sometimes make us look stupid to the unchurched, so you guys are finally a breath of fresh air.

"Wait, did you just assume my religious identity?"

Oh, sorry! I just saw the "Eternal Damnation" and jumped to the conclusion that you also were Christians! I realize now that was rude on my part. I assumed at the very least, one of the few other fellow hellfire religions like Islam could not be your brand, since "Muslims" were already on the sign. And I have not yet seen any Hindus, Jews or Pastafarians with any comparable banners, braggadocio and bullhorns outside my favorite Portland Comic-Con.  So fingers crossed, I hope I have sleuthed out your preferred holy book and I'm talking to the right person!

Gosh darn it, let me start over.

Unlike some, you are obviously willing to touch "homos" and other topics with a ten foot pole. Or maybe it is only a nine foot banner pole... I cannot gauge the height of the Deadpool shirt guy. The point is that you don't leave us guessing and clueless about our eternal futures, like some Christians who are unwilling to spend some time and money at their local print shop. You are not like those (pardon my french) "wimps" who shirk from the persecution of their faith by getting fired just because they screamed something incomprehensible in the break room at a dark skinned coworker. You are willing to go the extra mile, as Jesus commanded.

In other words, many unbelievers are left guessing whether Christians hate them secretly or if they actually hate them openly. You take away all that guesswork.

You actually love/hate those Thugs enough to tell them about the Twelve Commandments.

With limited banner space, I know that you clearly took time and money to carefully list only the most damning sins for us to avoid. Moses needed two stone tablets to fit ten of the most important warnings from God, but you squeezed twelve onto one taut and durable piece of vinyl.

I just had a few questions, to make sure we get our own signs printed up correctly!


On a more serious note, what the hell is wrong with us? No, not you, sign guy. I think we know some of your issues.

What is wrong with us Christians who can become irate when a Muslim coworker does not stand on his desk and vocally disavow every televised terrorist attack, but we happily scroll right past this? We see shit like this and are afraid to condemn it, because ninety percent of us agree with at least four things on the sign.

Like spiritual beggars willing to eat a turd sandwich because it has at least one piece of lunchmeat in the middle, we stay silent. Be careful. Play it safe. Don't touch that post with a ten foot, bannerless pole. Maybe God hates homos and yoga pants as much as Church Guy and his non-prophet organization. I found this picture on the Facebook page of a friend who is an atheist. I regularly find my friend shining a light on our absurdities, when we believers should be the ones excelling at that.

This Church Guy's partially literate God ran out of banner room and had to move some of His excess hate over to His brave follower's t-shirt. From there, sign guy could also clarify exactly where (his) Jesus stands on Black Lives. And yet maybe we do not need a Thirteenth Commandment, but only one.


Beloved, let us love one another: for love is of God;
And every one that loveth is born of God, and knoweth God.
He that loveth not knoweth not God; for God is love.
- 1 John 4:7, 8

I realize all the blank space that our banners will have would leave far too much to interpretation, so here is an even better idea:

Let's stop putting any "God quotes" on banners, shirts and bumper stickers for a while. Like, for all of 2017 for example. You don't even have to start a blog, if you don't want to.

But then on January 1st of 2018, let's ask the weirdos trying to get into the Comic-Con, including the Supergirl cosplay women with their gross, offensive, spandex covered butts, whether or not they even know the beliefs for which we Christians claim to stand.

If not, we can always go back to the bullhorn bullying and sinner saving signs. That seems to be working well.