And the propane's red glare... tanks bursting in air...


The second degree burns are healing up nicely. In my defense, they were inflicted on July 3rd and did not involve fireworks in any way.

We spent some time in Pacific City with friends this weekend and camped with them there on Saturday night. The day was as beautiful and sunny as you could ask for. 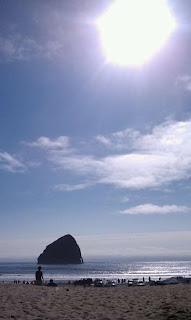 But since this is Oregon, it was obligatory that by nightfall a steady mist of rain came down for a couple hours and threatened to quash our S'mores plans. (Maybe. I don't actually know for sure what "quash" means.)

Our firewood had been soaking up the mist for a couple hours and was not willing to light, but I had both modern inventions and a lack of healthy fear on my side.

Years ago, a friend I went hunting with had given me a torch attachment for those ubiquitous (another big word), green Coleman propane tanks. It has been a real lifesaver many o' time, since I am not yet camping buddies with Cody Lundin.

If I use the torch again in the future, I will probably not use a year old tank with dents and rust on it. The torch attachment sounded funny the whole time and the flame was weak, but it was still slowly starting to light the firewood.

After about 45 seconds, the entire tank and my hands became engulfed in flames, but I quickly remembered the childhood safety tip of, "Stop, Drop and Swear".

The tank was still on fire on the ground and since I was worried about it blowing up, I yelled for everyone to get back and threw my body on top of it, like in the movies.

OK, I actually just grabbed it again, still on fire, and turned off the torch attachment. But it was still selfless and valiant and stuff.

I won't "catch a grenade for ya" like Bruno claims he would, but I will, "grab a propane tank engulfed in flames with my already burned hands and turn off the nozzle for ya". (OK, his is catchier.)

Then I continued to light the fire, but I was back to doing it like they did centuries ago whenever their firewood got soaked, with wadded up paper bags from Safeway and a lighter.

I also used the expression "wow, that got me good" about two or three hundred times and plunged my hands into a bag of ice every couple minutes for about an hour.

And then I spent the night sleeping like a baby. Which is to say, I woke up crying every 15 or 20 minutes.

I did not take pictures of the blistered second degree burns on the tops of all my fingers, but you can thank me for that.

Later the next day, enjoying a scotch night with some buddies downtown Portland, they assured me that they were disgusting looking and I was a jerk for showing it to them right before the food showed up.

I definitely learned an important lesson through all this, which is that to be safe on the 4th, I need to stick to only lighting the illegal fireworks I bought out of that guy's trunk.
Posted by pshene at 11:21 AM