I am old. Everyone already knows I am old (nigh a half century), but I paid a medical specialist this month to confirm it with specialized testing, such as x-rays and carbon dating.

My right foot has hurt for almost ten years and I always attributed it to a past martial arts sparring injury, when I accidentally kicked a little kid in the head. The second time.

While examining it last week, it occurred to the doctor to have me also remove the other shoe from the non-hurting, yet equally old left foot.

She asked if I ever noticed the foot's ball (latin for "big toe knuckle") of the right, hurting one was much bigger than the one on the left.

I honestly hadn't and thanked her for finally giving me something new to be self conscious of my body about. Awesome!

The x-rays came back on Friday and her suspicions were accurate, that the right foot has arthritis (latin for "old person knuckles").

Arthritis can afflict people of any age, but is usually associated with the demographic of decrepit fogies in rocking chairs, holding a big metal horn up to their ear and yelling "EH?" a lot. My people.

The good news is it only hurts really bad if I step down on the right foot and the bad news is I only do that about 20 or 30 thousand times a day. When I first started working out 6 months ago, its regular and constant pain of almost 10 years started to increase a bit, but has gotten a lot worse in the last month.

Serendipitously (or some other big word), this is the very last day of my finishing P90X for the second time this year and with the foot pain, I have been forced to modify some of the exercises.

One of them is called "balance lunges" and is a deep lunge with the back foot up in the air on a chair behind you. This allows you to really target specific areas, maximizing everything from falling over, to pulling a groin muscle. 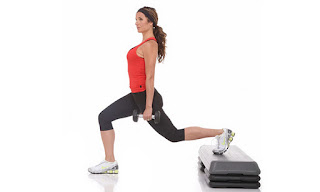 (This was me, just 6 months ago!)
Other than that, the only exercises I have had to modify a little are the few that require either standing or stepping down on the right foot. So, only the ones that are not sit-ups.

I also started running 6 months ago and in that relatively short time, I went all the way from a 12 minute mile, down to an 9 minute mile, then down to a 7 and a half minute mile and finally down to a fairly impressive "oh my god, what's wrong with my foot".

From the doctor's referral, my next step is to go and see a Podiatrist, which is good, because I can finally ask an actual foot specialist how in the heck they got stuck with a name as stupid as "Podiatrist". I mean seriously... say it out loud.

I'll probably also ask what I can do to keep working out, running and maybe even continuing this whole "walking thing" I've grown fond of over the last forty-mumble years.

We'll see. I am supposed to start P90X2 in January and I'm already looking forward to the crazy pull-ups and any of the other non-foot-contact-to-floor exercises.

I'll definitely find a way to keep going without injuring myself worse. I have to. I can't imagine reeling back my working out, as I've gotten addicted to it.

I actually rely on exercising now, for regulating energy and mood levels as well as helping with other chronic pain conditions and being able to give lots of money to GNC every month.

I have had to compensate for other physical limitations. I have a bad left hip and two bad shoulders, one that I dislocated and the other that I had surgery on.

But I am being extra careful and modifying whenever needed, so I can keep active and continue exercising. I think it's important.

This will probably be the first time I have ever, ever suggested that others make a personal decision to improve their diet and exercise, but I really do recommend it.

Try it. You'll feel better, look better, live longer and have one more thing to really annoy people about.

In all seriousness, after I finished P90X the first time 3 months ago, I did a two part blog post about the health problems I have had over the years, wanting to focus on diet and exercise but being unable to.

Diet and exercise are two of the few things at my disposal for helping with my chronic pain of many years.

Here are my before and after photos, going back to May, then to August and then from today.

I honestly have really worked a lot on my leg muscles too, but for now am only posting pictures from the waist up, to crop out the freakishly over-sized big toe knuckle.