Usually I keep fitness posts light and goofy because, let's face it:
a) diet and exercise are not inherently very exciting, and...
b) nobody likes being preached at

Sorry... I will be a little preachier this time than usual, but don't take it personally. I have been driven to it by aggravation with Madison Avenue (where the name "Mad Men" comes from, by the way) and their advertising of late.

I have a Burger King billboard by my house that shows they are just openly mocking us at this point.

There are 3 pictures on it:

One is an ice cream cone with the word "side" underneath.
Next is a hot fudge sundae with "entree".
And finally, there's a whipped cream topped ice mocha with the word "drink".

Because nothing says expendable income and the god given freedom to make bad choices like having dessert for dinner, followed by dessert and washing it down with a 3rd dessert.

Why? Because we're America, THAT'S WHY!

Here's the same billboard in Seattle that somebody spray-painted graffiti over the top of the BK logo: 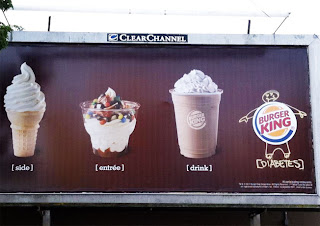 Northwest Hippy Makes Good For Once
I'd like to think that not too many years ago, this ad would never have seen the light of day.

Not even because of public outcry against unhealthy diet, childhood obesity, etc., but because enough test groups would think it so nonsensical and humorless that Burger King would not risk tons of advertising cash on it and maybe even fire the guy stupid enough to suggest it.

Based on the progression of their respect for us, both for our stomachs and our heads, here's my predictions for Burger King's ad slogans in the upcoming years:

"Sugar's a helluva drug and BK is your dealer. Where's my money?"


But when it comes to the Mad Men mocking our intelligence, this pales in comparison to the endless parade of magazine covers promising the newest "25 Secrets To Weight Loss!" Sometimes it is only 5, but other times as many as 50 or more.

I hate these "articles" for multiple reasons. One is that it implies there are secrets to fitness, many of them.

Let me tune you in on a little secret... there are NO secrets to weight loss.

And the only TWO things... totally NON-SECRET things... you need to know were discovered by scientists only very, very recently. Just around 20, 000 years ago:

Write those down. They are hard to remember. They are also secret, so do not tell anyone.

Eating better is not complicated.

Sure, there's a few nuances and subtleties if you really want to get into it. But for starters, even a child can know healthy food from unhealthy food - just remember one simple thing... eat things naturally occurring in nature... things you see other animals besides humans eating.

NOT Naturally occurring in nature:


The other thing I hate about those articles is they imply that fitness is complicated and difficult. First you have to buy the magazine, then you have have to read the loooooong article. Reading's hard!

And 50 things takes a long time to read. Even if Jersey Shore succeeded in its main goal, which is to dumb down America to such illiteracy that all magazine articles were just a series of pictures, even those 50 pictures would take a while to look at. If you've ever read a picture book to a pre-schooler, you know this.

And 50 things is a lot to remember, not to mention a lot of things to have to do or not do.

Let me let you in on another secret. Fitness is neither complicated nor hard. In fact, it is one of the few things almost every single one of us have complete and total control over.

You want to know what's hard?

Try saving your first million dollars before you're 50. Give that a whirl. Or try climbing up and back down Mt. Everest. In fact, just try saving up enough money for it and getting the time off of work to do it.

You want to know what's NOT hard?

Sticking an apple in your mouth, instead of a donut. Walking around the block, instead of to the fridge and back to the couch.

Those are things literally every single one of us can do.

In a world where you cannot control who you're related to, who you have to work with, who you have to drive in rush hour next to or even how good looking you are... you CAN control eating better and moving around more.

And the best part is that you will feel better, look better and live longer.

And when you start noticing you feel and look better after choosing day after day, week after week and month after month to eat better and move more... you will feel empowered.

You will remember you can do almost anything you simply choose to do.

Who knows, you may even be motivated to do other things you have put off or convinced yourself you can't do, like save up money or go mountain climbing.

At the very least, you may be excited to try out night climbing... up billboard towers with your neighborhood hippy.
Posted by pshene at 5:37 PM