Every move you make

Earlier this week I went in for a sonogram on my heart (EchoCG).  Aside from complete certainty I am not pregnant yet, they have not offered me other useful data from that test.

They have been monitoring me over the last few weeks because for at least the last 3 months, I have been waking almost every night with my heart racing super fast, sometimes out of rhythm.

With my heart then beating as fast as if a zombie had just broken in or as if I had chased a hobo around the block, it is almost impossible to doze back off and thus the accumulative lack of sleep is somewhat destroying me.

While sleep has long been called "overrated" by our lovable neighborhood crack addicts, science shows it is surprisingly useful for preventing dying. So I would like to do it regularly again.  At least a few times during my average work-week and preferably not while at my desk or in the car.

So, for my doctor to get all her ducks in a row and kill two birds with one stone, she decided there was more than one way to skin a cat and sent me last night to count sheep at an in-lab sleep study to see if I have apnea.

This is that story.

First I should warn you this might get a little graphic, even scary. I was even able to surreptitiously smuggle a few photos out that were secretly taken on my phone by the sleep technician. Someone had to break this story about the seedy underbelly of sleep "science" and I... and maybe TMZ... am that someone. Are that someone. Whatever.

My healthcare provider (real name omitted - we'll just call it the made up name of "Piezer Kermanente") has a large campus directly across the street from a Day's Inn hotel and actually uses their whole 3rd floor for studying people sleep. My experience there last night was typical.

When I arrived to the hotel, I saw we were just down the road from Clackamas Town Center. I was immediately encouraged by the hotel location and my chance to nod off a few inches away from the on-ramp to I-205 and what occasionally sounded like frantic hobos possibly being chased by zombies.

I bypassed the front desk and followed the "Piezer Sleep Study" signs to the 3rd floor. Once checked in, they walked me to my room and we passed a larger room full of scores of monitors where they were meticulously recording dozens of us patients snore and drool.

My sleep tech looked like he was moonlighting from his regular job as a college linebacker, so as he escorted me into my room I was relieved there were no candles flickering or Adele softly playing.

But the huge bank of video cameras on the ceiling were still a little unnerving. It felt like I was stuck somewhere between either a sting of Toronto mayor Rob Ford or the making of a new Kardashian tape. 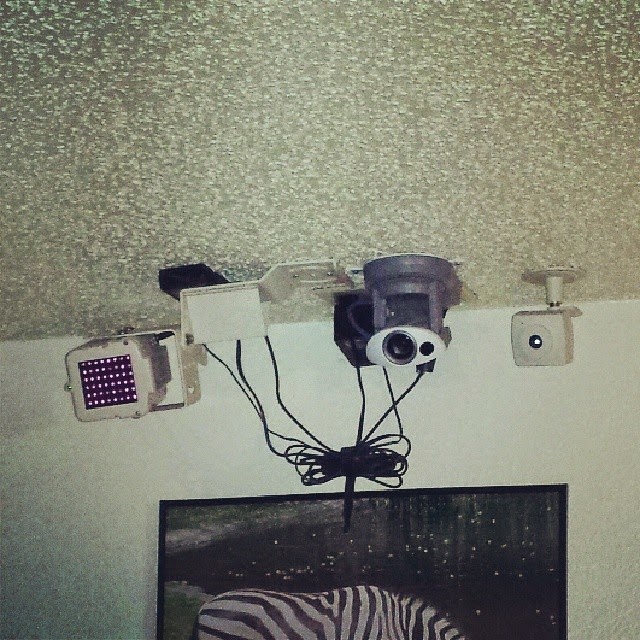 
Falling asleep in a new hotel has already long been hard enough for many people, but this place was different as you immediately noticed on this floor the rooms have OH MY GOD NO LOCKS ON THE DOORS.  But I was immediately set at ease that probably almost none of my fellow patients in the next door rooms were sleepwalkers and/or wanted by the FBI.

The tech informed me the cameras were supplemented by very sensitive microphones throughout the room which they listened to live and recorded. This is of course very useful and inviting for make-believe people who never, ever fart during the night.

Amy has also often told me I can tear into weird and profanity laden outbursts in my sleep, so I had a little fun and pretended a couple times to blurt out in my sleep,  "... the %^&*ing money we stole is buried behind the Town Center! Zzzzzz!".

I don't know if he fell for it, but the tech told me that, "all the sensitive wired connections can tell exactly when you are awake or asleep, so please stop doing that".

I almost forgot about the wiring. Since there are only a couple hundred thousand or maybe million of them attached, you hardly notice they are even there. Here is the picture of me taken by tech once we were done: 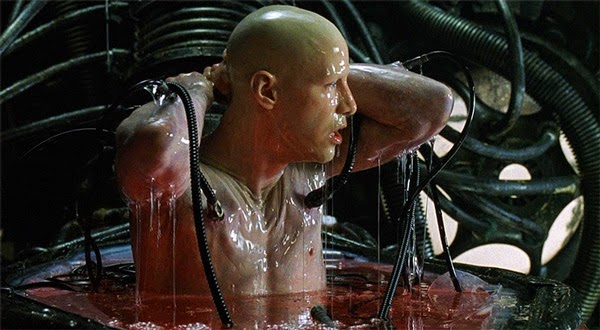 
Sorry, wrong picture! Here is the correct one of me: 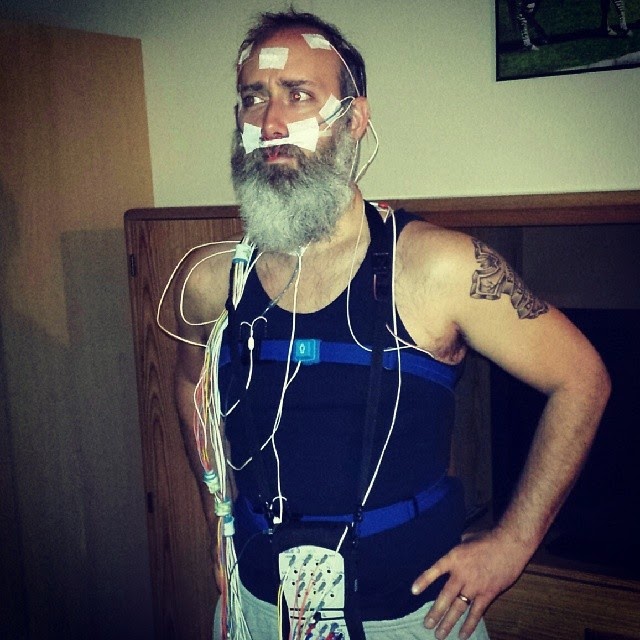 To get an idea of how many stickers and wires are attached, try the following, easy test:


They even had to put electrodes on my jaw. This raised my concerns, especially with the foot thick grey rug I have been carting around under my nose and ears for the last 9 months.

Fortunately, the tech assured me despite my thick beard that they would remain stuck on my jaw with a "special type of glue that will wash right out" and sure enough, it absolutely did not wash right out at all.

The next morning, I even had to sneak mid beard shampooing to my neighbor's unlocked room to steal an additional bottle and I clearly disturbed and offended several sleepwalkers on the way.

Anyway, despite all the wires jabbing into every never-intended-for-wiring crevice of the human body, I think I finally drifted off to something similar to sleep.

About 3 hours later, I awoke to the 200 lb linebacker hovering above me in the dark and saying that one of the wires might be loose.

Sure that might sound unsettling, but since I was in a strange new hotel room without a door lock, clearly attached to the Matrix, I was able to immediately drift back off to not sleeping ever again until I got back to my house.

Every few hours the tech's voice would come over the room speaker and say, "Pat, I notice from our sensors that you still are not falling back asleep. Is everything OK?"

I replied back, "What IS life? Why are we even here on earth? Do YOU believe in life after death?"

The tech then said "that's it, we're done".  He said he had actually gotten good data of me sleeping on both sides and my back, so they might have enough for analysis.

After my shower and hallway shampoo incident, I was ready to pack up. It was just about 5:00 am and the sun was starting to come up just like at the end of the 3rd movie of the Matrix trilogy.

And I felt satisfied that I had just finished thoroughly exploring some of life's most important existential questions as well as personally contributing to this fascinating new pseudo-science.

I couldn't help but smile as I drove passed the Clackamas hobos and zombies and finally headed home, possibly in the right direction on highway I-205 on just 3 hours sleep.