The sidewalk before the Westhampton Methodist church, covered in their own stark shadows and that of the luscious summer trees about them, spoke of the momentous and sunny day that would last for several more minutes. The unpredictable June clouds would immediately billow in and cover the same sidewalk with rain, but the undamped spirits only rose higher.

The unassuming, Clark Kent-esque figure stood with knee just slightly bent, as if to help meet halfway with the three inch heels on the beautiful brunette beside him. Her pale blue skirt and jacket were something. The grandmother’s veil would be something else, something borrowed. The joy in her bright blue eyes were something perfectly new. The excitement and pride in those witnessing were something so many countless ages old and yet thankfully every day renewed.

The slight, metal rimmed glasses would last only a few years before replaced by the thick, black ones issued to every sailor, the ones that would drag him and the brunette far across the country more than once. By the time they handed his new spectacles to him, just years away from these headiest moments that never have quite enough pictures, that tiny Clark Kent junior hiding inside, behind the pale blue skirt on the momentarily sunny Westhampton sidewalk, would be joined by his blue eyed little brother. 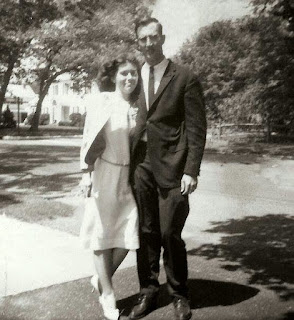