A few weeks ago, Amy and I started going over some other countries we might like to visit next year and she nervously said she wanted to stay away from places more prone to terrorist attack and agreed Paris was one place that would probably be fine.

As America is still reeling in horror at the attacks in France yesterday, I remember that one of the benefits of having so many friends on Facebook is that I get to see the broadest variety of reactions to everything in the news, from the mundane to the outrageous and tragic. Some call for yet more prayers, while some angrily call for an armed response. Others take the time to type out or read heartfelt sentiments, in either short posts or long blogs, while many others just change the colors of their profile pictures. While the many contrasts in such different responses are stark, all but the most extreme feel as if they have some validity to them. They also feel too damn familiar.

When yet another mass shooting or terrorist attack once again spins up the quarterly or even monthly news cycle, the first thing I notice in the subtext of comments and reactions is a desire to speak out something, anything, so as to not accept it as the new normal and resist it being something to become desensitized to and care less and less about. The next thing I see is an obvious fear that if over 120 can be murdered by ISIS in the streets of one of our more powerful, vigilant allies, it could happen here in America. Suddenly our humanitarian cries and John Kerry and this administration calling to draw in an astounding 85,000 Syrian refugees next year and 100,000 by 2017 has less supporters than before. Just 24 hours before the attack, the President tragically said that ISIS is not gaining strength and that we've contained them.

I admit I recognized the subconscious fear it could happen here when I for the first time in a long time remembered the job offer I got a while back from one of our federal agencies that specializes in protecting our borders. I wonder if there is more I could and should do. I also admit my response falls somewhere between the "just pray" and "we need to hunt them down".

Here is what you and I do not want to hear: this ideological war will not abate or be "contained". The horrific and specific attacks on civilians will increase. The shocking nature of the slaughters and beheadings will continue to spiral upward and will be posted on YouTube. Our saying that "we care" and posting pictures of candles will not even remotely slow that bloody march in the years to come.

This administration has made some important progress against these militants in the last eight years, but they've suffered some terrible setbacks as well. Maybe unfortunately, they also felt it important and useful to initially abandon the expression "war on terror". The terrorists have not abandoned that war.

Like others, I am writing to speak out against the encroaching temptation to become inured and numb to these events. I want to say something that is meaningful and important. Yes, let us pray for the families and friends of the over 120 people murdered, but god help us if that is all we try to do.

When "only" twelve people were murdered in Paris in the Hebdo attacks, it was up until then the deadliest attack in France since 1961. Just ten months later, it is now paled and entirely overshadowed by a slaughter of innocent civilians that is over ten times in size. Shortly after the attacks back in January, thousands of Parisians gathered in the streets in solidarity and one perfect, succinct sign stood out above the others. Regardless of your feelings on how we should respond, in the face of the horrors assured to continue in the years to come, it is something we must all agree upon so that both our enemies and we ourselves see it written and hear it stated out loud, again and again. 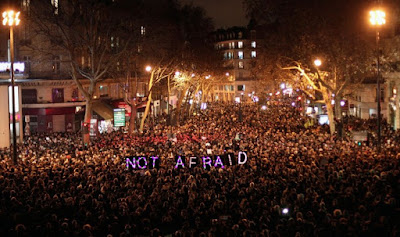