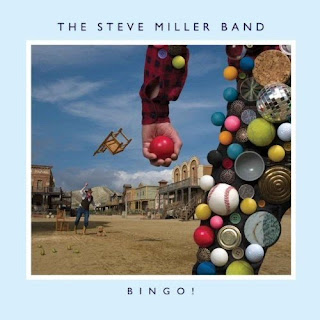 On this Father's Day, I am reminded of how lucky and grateful I am that my dad and mom both listened to so much great music when I was growing up. Stevie Wonder, The Moody Blues and Steely Dan were regular fare when I walked in the door from school each day.

To this day, I still can picture myself excitedly asking dad one afternoon if I could put on the The Joker record, at our home in Hampton Bays, N.Y., when I was still in grade school. Again, I consider myself lucky that dad bought and played records by artists like Joe Walsh and doubly so for ones by Steve Miller Band, who remains one of my all time favorites.

On June 15th, Steve Miller released Bingo!, his first studio album in 17 years and I just had the chance to listen to it several times. If you are already a fan of Steve's vocals and his literally lifelong infatuation with the 12 bar blues, you will love this album.

Although it is being touted as a tribute album, with no originals, there are certainly some benefits to that. He caters directly to his strengths and doesn't attempt to reinvent himself for 2010 or even meld his blues/rock strengths with the bubble gum pop trends of the day, like so much of Abracadabra (1982).

Stylistically, I think it is most reminiscent of the sincere effortlessness of the many blues songs on The Joker (1973) with only rare and very subtle nods in songs like Come On to the psychedelic staples of Fly Like An Eagle (1976).

Steve Miller himself described the album as, "... a party record, man. It's about getting up and getting ready to dance. It's like the fraternity party gigs I used to play in college. I went through and picked all my favorite tunes that I really, really loved. I wanted to make this record forever; it started off as just kind of a goof, and then it got real serious."

Though he hasn't had a studio release in almost two decades, he has remained fairly active touring and you can tell he had his mind largely toward songs that would work well in concert.

Typical for a Steve Miller BAND release, he goes out of his way to let others shine, sharing some of the lead vocals with Sonny Charles of the Checkmates and even intertwines some guitar solos with Joe Satriani, of all people.

Fortunately, Satriani is very reserved and controlled for this obvious blues (more than rock) album. If you didn't know he guested on the CD, Joe's riffs might even go unnoticed against Steve's equally great guitar work, aside from maybe some sharp, well done lines in Sweet Soul Vibe.

Steve's own guitar work is as tasteful and warm as ever, incredibly smooth and precise without being cold or overproduced. It you're already a SMB fan, get this CD now and get a head start on playing it over and over this summer.
Posted by pshene at 3:15 PM