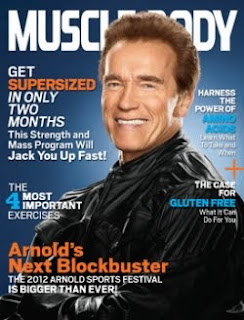 (Slightly less old guy Pat Shene featured within)
Now that I am being featured in this month's Muscle & Body magazine, I can say that I have finally arrived and start asking people, "do you know who I am"!

Luckily, after my amazing good looks, humility is one of my greatest traits.

That's because I long ago learned that if you ever are stupid enough to pray that God would give you humility, He is more than happy to supply you with children.

My daughter read the editor's proof of my article with my before and after pictures and was so excited and proud of her dad that she asked if I ever noticed that one of my "nipples is a lot higher than the other?"

And before that I was self conscious of how balding I am in the pictures. I hardly notice that now!

I thanked her for her candor, let her know she was only the 7th person to point it out and that she was grounded. (It is not easy to ground an adult child away at college, but it can be done.)

After my 2nd time through P90X, my GNC store manager asked for my before and after pics to send in. Shortly afterwards I also sent GNC an email, letting them know what products I have had good results from and how much time the guys at GNC had given to me.

Managers Kyle and Charles had taken hours to answer dozens of my questions over the last year, from supplements to diet, etc. Both are very fitness conscious, lift weights and never tried to oversell anything. They were great.

About a month later, I got a call from the managing editor of GNC's magazine Muscle & Body. She said she was called by GNC corporate who said they wanted the magazine to do a two page Achiever column story, instead of the usual one page story.

Part of the reason was to focus a little more on my back story, as I have been a chronic pain sufferer for over a decade, my journey of coming off all the medicine I had been on and my making a commitment to try to instead manage my pain as best as possible with diet and exercise.

The other reason was the sheer amount of page space that was needed for the huge, full color, high definition picture of my uneven nipples which are now in every GNC store in America and maybe the world.

The editor Pam was a genuine pleasure to work with and she quickly found out in our phone interview and sea of emails back and forth that having enough content to fill 2 pages was not going to be a problem. (Apparently I can be "loquacious".)

I don't think the article leaves much unsaid, but I would stress a couple things.

Firstly, I would say that that the most important ingredient to fitness is mental. You simply have to make the decision to go for it.

Secondly, I would say that "firstly" doesn't sound like a real word. Firstly. Firstly. I probably should have just gone with "First of all". OK, I will totally go back and fix that.

But fitness really is mostly mental. Most people simply have to finally get to the point that they make the unwavering decision that eating right and moving their butt is more important than eating wrong and parking their butt.

Sadly, for far too many, it takes a dramatic and frightening health scare. I wish it was not that way, but for many it is just that.

In our lives, we waste so much precious time and forget that we should not do that because "time is the stuff life is made of". Years actually do seem to go by faster and faster as you get older (I am almost a half century, which is just ridiculous).

And decades of inactivity and poor eating will unquestionably catch up to you.

I was partly pushed into focusing on fitness because I lost such an amazing amount of my quality of life for so many years, missing out on time with family and friends and knew I had to try to take control of a miserable situation with my pain condition.

After being off of the medicine for over a year, eating right and exercising, I overheard my wife tell someone that it was like "finally having him back".

I am still in pain every single day, yet despite that am more fit and happy than I've been in years.

But I sometimes wonder if I still would have started to turn my health management around, if it had not first gotten so bad in the first place.

What does it take for the average person to choose health and fitness?

There is a great joke/meme popular on the Internet now that makes fun of Americans and other first world people complaining about their petty "first world problems". 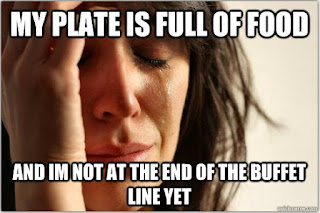 Then move your butt out of the line!
I've had to stand over a whole minute and I'm exhausted!
The irony is that because of how most Americans have disposable income and the glut of inexpensive, easily accessible junk food, our actual first world problems are very real and not a joke.

They are just self-inflicted problems. They are the many preventable diseases that cut our lives short and overburden our health system.

And I am not just a health nut preaching. They are actually called "diseases of affluence".

They are by far the most common causes of death in modernized countries, and yet also most easily delayed and prevented by our simply eating a healthy diet and exercising. They stand in stark contrast to "diseases of poverty", which include much more simple and traditional things. You know, things like gunfire, dysentery and starvation.

Huge portions of the world are dying from not having enough food and yet we are dying from stuffing too much of it into our ever widening doughnut holes.

OK yeah, that was preaching.

The irony is that eating healthy does cost a little more, but almost all of us could still very easily afford to budget it, if we simply made that choice.

Eating healthy and exercising and how much better they will make you feel are their own reward. Don't wait for something tragic like a personal loss, physical ailment or health scare, to jar you into making the right choices.

The biggest part of fitness is mental and your simply choosing to do it. So choose to start today.

Secondly, I would hope it is already mostly implied in the article that good diet is by far the most important ingredient in fitness. (Well, I guess after "mental", which obviously is firstly.)

Eating right is not a mystery. The recommended daily allowance for fruits and vegetables is 5 to 9 portions a day, which for most Americans is approximately 5 to 9 more portions than they actually have. 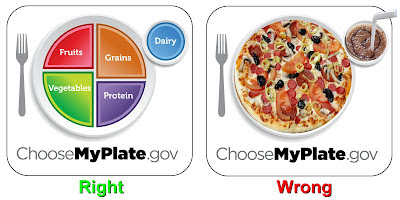 Even if you only walked 30 minutes a day, I can guarantee you will burn calories and body fat like crazy if you simply were to follow the ChooseMyPlate.gov recommendation of first filling your plate at lunch and dinner half full of fruits/vegetables before you put anything else on it.

I have been doing it for the last year and I know it works. And the long term health benefits are huge.

Thirdly or nextly (ok, there's no way that is right), moving our bodies, even if it is only walking every day, is the next most important thing after good diet.

We already spend a whole third of our day/lives unconscious and not moving in our beds. Why would we spend another fourth or third of it, motionless on the couch and equally brain dead? (I'm of course referring to watching Jersey Shore.)

Laziness is overrated. Our bodies are meant to move! You can be motionless when you're asleep and again when you're dead, so don't do it the rest of your life too!

For instance, regretting not actually getting off your butt and living life, but instead spending it sitting on your butt, watching Snooki and eating cheetos.

Lastly (which is totally a real word, I checked), I would refer to my mention of supplements in the article, but reinforce that they are only useful as an added fuel to an already burning fire.

If food is firewood and exercising is matches, then (some good) vitamins, supplements and shakes, bars, etc. are like adding a little gas to the fire.

That's it. There are no shortcuts.

If you think you can just take diet pills or shakes, continue to eat terrible, not exercise and somehow still be healthy and fit, it will be as useless as dumping gas onto the dirt.

You might even lose some quick weight, but it will always be short lived and come right back with a few extra pounds. It certainly will not add years, energy or quality to your life, which should be the first goal in fitness.

Our bodies are amazing machines that can run incredibly well, but only if run regularly and given the proper fuel, which first and foremost is good food (hint: they usually look, smell and taste like vegetables).

Pam gave a whole section to me in the article just for diet, so hopefully everyone reading it understands what I think is the proper place that powders and supplements play in a healthy lifestyle.

I sent her an email with a full rundown of everything I eat on a weekly basis and she said it was "perfect and we only have 2 pages, Pat". But I think we made the point.

That's it for now. I'll be continuing to blab here about diet and exercise on occasion. I just finished P90X for the 3rd time through and I will probably find a way to somehow ramble at length about that and what I will do next.

Since this blog has admittedly evolved into an almost solely P90X blog over this last year, I will also be helping start up a dedicated diet and exercise blog with a friend of mine who is a certified personal trainer, called Healthy Understanding.

We have another friend who lives in Timbuktu or some odd place that is not Oregon that has also made great strides in her life with diet and exercise. She will write some blogs with us too, and she is almost as funny as me.

It will not be a "we know it all" blog, but rather, "we know enough to offer guidance and tips and are working hard at this too" blog. We hope others will join in.

I am sure that I will still regularly talk about health and fitness on this blog, since it is a passion of mine. But this other new blog we're starting will finally free up this one here for other passions of mine, like offending people with politics and religion.

And posting obviously photoshopped, fake pictures of me with perfectly even nipples.