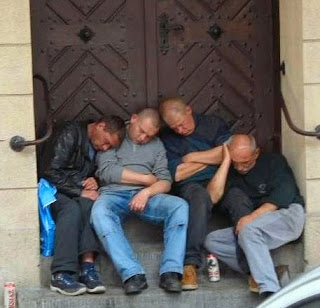 (And it all started with Communion wine)
(Part ONE is here)

Sex can lead to far too many abuses, such as adultery, cheating, perversions and the like. It is best that we just avoid all sex altogether from now on. I mean, why even take a chance with something so potentially harmful and dangerous? If we don't ever even go near sex, then we can never misuse or be hurt by it.

Sound silly? Now you know how I feel about your assurance that my beer upsets Jesus.

But the nice thing is that with diligent study of the Bible, you can discover exactly what God thinks about Christians drinking. Well, in YOUR mind, at least. (But for many, this is plenty.)

If a Christian makes a personal choice to never drink, I totally respect that. I certainly don't insist that they should drink, and many mature ones will not insist I must teetotal with them.

I am far more frustrated with the logic that some use that it should never be touched because if misused or abused, then it can lead to terrible things. So "total abstinence from alcohol is just safest", is the reasoning used.

Aside from the whole "use God's word for our standard" being thrown aside while we make up our own guidelines as we go, the logic itself is still poor.

We could apply that thinking to those just as deadly cars and never drive them again. Guns and sharp knives will have to go. Ironically, many anti-gun people do use this same reasoning for wanting to get rid of them altogether (they kill people!) as we Christians use for alcohol.

We Christians took this goofy logic to its ultimate endgame with Prohibition in America, between 1920 and 1933. And aside from little snags like the Saint Valentine's Day massacre and mobsters like Al Capone rising to power, it was a rousing failure. (If we do it again, we need to hand out more fliers this time. Education is paramount!)

Invariably, someone will have a horrific drunk driving story or a growing up around alcoholism experience (as I have) to prove it is only and always wrong. But this still glosses over the subject.

If you think I am going to argue that drinking is OK for everybody, I'm not. It is not. If we use the Word as our guide (which Christians should), then does the Word say drinking is a sin? No, no it does not. Does it say drunkenness is a sin? Why yes, yes it does. And for some, never touching it at all is absolutely for the best.

But I still prefer to focus on talking about being responsible and not applying knee jerk reactions to our moral convictions. I also think a lot of Christian kids end up over the deep end with it (as with many other things), because they were never shown that it can and should only be used responsibly and in moderation.

If it's a "sin" to even touch it (forbidden fruit is so tempting), then might as well go all the way and get hammered.

Our two kids might have the best of both worlds, having a mom who has never had anything to drink and a dad who only drinks in moderation. They see it is not scary and dangerous, but it is also cool to choose to never drink, if that's what you want. (Drinking does not make you look cool, as obviously only smoking does that. Duh!)

Kids will mess up and make mistakes, whether they are Christians or not. The main thing is to teach them they are both capable and expected to become mature and responsible, without creating artificial and largely useless safety nets to shield them from the world.

Ironically, many Christians retreat further and further away from all other people of the world, into the four walls of their churches, where they ramble on at length about loving and reaching the world for Jesus.

Yeah. We're nothing, if not consistently ironic in what we say and do. But maybe acknowledging that is a first step toward changing it.
Posted by pshene at 7:34 PM