Once in a while, I like to attempt writing an earnest blog post, just to prove to myself that I can still do it. And within just minutes of clacking away at the keys, I am comforted by the fact that when the time truly calls for it, my being serious is still next to impossible.

Last night, Amy and I joined Austin at his Senior dinner celebration with the rest of his class, their parents and several of their teachers. It was catered wonderfully by the Principal's husband, Mr. Phipps.

(You'll quickly notice that everybody is either a "Mr." or "Mrs." and yes, you may revert to feeling like you too are back in high school. Hang in there.)

Mr. Flaherty (see?), did an amazing musical video compilation with all our many submitted pictures from their baby ones to senior photos. I was surprised at how different they all now look. When they were younger, some of them even were almost as cute as my redheaded progeny.

Then Mr. Flaherty (sorry... "Jacob's dad") asked if anyone would like to say a few words and if so, he would bring the microphone to their tables.

Mr. Hayes and the Principal, Mrs. Phipps were among the first to say a few words, all of which were very positive and sometimes humorous.

Then one of the moms got the microphone.

OK, I am pretty sure that I looked over to see Amy reading a schedule that only the moms were secretly handed and that said, "We will begin crying at 7:45".

And look, I am not against moms crying, especially after their being plied relentlessly with their own favorite baby pictures and the impending prospect of those very babies soon moving away to college.

Crying is something the moms are very good at and if only the dads cried, it would just look weird. So, go for it ladies.

But even through the squeaking, snuffling and stuttering, a couple themes became very clear.

You honestly would be hard pressed to find a room of parents more proud of their sons and daughters as that one last night.

Many of the seniors took the time to articulate well just how much their fellow students, teachers and parents had meant to them over the years.

They even took the time to honor their class sponsor, Mr. Mark, with several presents they obviously had put a lot of time and thought into preparing.

And they expressed how thankful they were for the chance to attend a school as fine as North Clackamas Christian and the financial sacrifices that they knew many of the parents had made to send them there.

(I once asked Amy if I could calculate and show Austin how much money we could have saved by sending him to public school and the sweet, sweet Corvette I could have had instead and she said, "NO".)

But it occurred to me during some of these comments that the amount of money invested in their going to NCCS was only symbolic of so many, larger and eternal sacrifices.

The volume of support, prayer and love put in by the parents and teachers, day after day, year after year, was incredibly evident. What was encouraging was to hear these young men and women say for themselves that they were fully aware and appreciative of it.

As many of the students spoke up, one by one, the level of genuine character, maturity and friendship was amazing to witness. I enjoyed seeing some of that firsthand, over and again this year while attending so many Saints varsity basketball games, both for the girls and the guys.

With the guidance of coaches Nelson and Lay, both the girls and guys teams this year absolutely played their hearts out for every game.

Those seniors who played this year, Austin, Aubrie, Caleb, Colton, Jameson, Kayti, Keith, Nicole, and Wyatt, all poured more heart and sportsmanship into this season than you could ever have asked for and they along with the rest of their junior teammates were nothing short of inspiring.

One of the final themes hit upon was the importance of them staying in touch and talking to each other after graduation and not letting these relationships drift apart, as is often so easy to do.

And sure, to some degree that sad scenario becomes inevitable, as people move away and interests grow and change. But nevertheless, you were left with a sense that down these past years, many strong bonds had been forged and were ones that would last.

Amy and I could not be more proud of our own two kids, the young man and woman that they are today.

But we are not proud in the sense of taking credit. We are proud to have known the friends and teachers who poured a huge part of their own lives into them to help shape the adults that they have become.

But most of all, we are proud in the sense of simply being there to witness the countless difficult but rewarding choices they have made and continue to make and the positive differences people like them will make in this world.

There was hardly a mom there with a dry eye and I think I have at least a little idea of why that was the case last night. 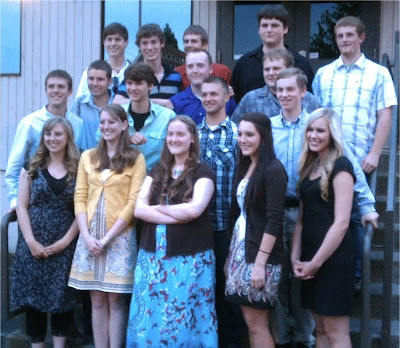