The World Did Not End Today


The quickest way to check the weather used to be looking out the window, but if it is sunny in Oregon (sometimes well over 14 days a year), it is now faster to look at your Facebook News Feed.

When I woke up this morning, I was fairly certain that Jesus did not take me or any other Christians in this year's Regularly Scheduled Rapture™, but I immediately checked my friend's status updates to make sure.

The glut of Regularly Scheduled Pictures Of Their 4-Year Olds™ were a good sign we were all still here.

The only upside to the rapture not happening yet is that Reverend Camping has now apologized and even promised to return the millions of dollars that all those dumm... I mean, people donated to his ministry to publicize this debacle, even if he has to go broke doing it.

Hahahaha! No. Seriously, though. No.

But it will work out that we are still here on this earth for now, because I started to help brew my very first batch of beer last night at the home of Hillsboro's premier master brewer.

He carefully guided me through the most complex parts of the brewing process, such as giving my credit card to the guy at the beer supply store and stirring the pot several times.

(I almost have the stirring skill down well enough to not break his new thermometers.) 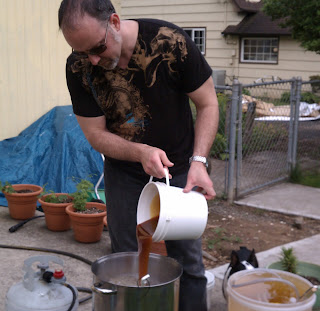 Step 1: Pour fresh batch of Beer Juice into boiling cauldron.
(Notice the left, muscular triceps. This is critical!)
If you have ever brewed beer yourself, then one of the first things you probably noticed from the above picture is that I am really ^&*%$# balding.

In a couple weeks, we will do some more stirring or something and maybe even passing of the credit card again. I don't know. I am still new to this.

Now, I know what some of you are thinking: "Pat, I thought you were Gluten Free, you stinking liar slash hypocrite?"

First of all, that's just rude. And secondly, we bought something called "Clarex", invented at a secret lab in Switzerland, using both science and probably magic. It literally KILLS GLUTEN. I am pretty sure that's what the article said.

Anyway, it will be my first real beer in a while, we are naming it "Glutenus Minimus" and it better darn well work.

And if so, Reverend Camping can NOT have any.
Posted by pshene at 10:39 AM

Email ThisBlogThis!Share to TwitterShare to FacebookShare to Pinterest
Labels: http://www.blogger.com/img/blank.gif