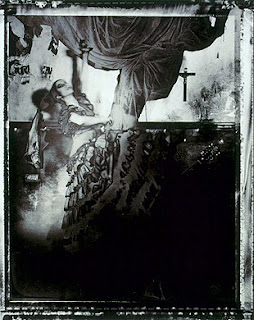 (From inside the CD booklet. This is not the actual cover.
In that picture, she is wearing a skirt.)

The band Pixies just recently released a new album called, "Surfer Rosa". I do not know if you've heard of it yet, but they only just now put it out in 1988 and I finally got a chance to listen to it today.

I have a coworker who listens to NPR (you know the kind) and normally I would hold this against him, but he is the reason I got to hear this brand new CD.

He knows that I typically listen to a smooth mixture of butt rock and church hymns and took it upon himself to encourage me to expose myself more. Especially to different styles of music.

If you have never heard the Pixies before, I can try to describe them. This is only the 2nd CD of theirs that he has lent me, but I feel like I am coming to grasp a little bit of what they're about.

Imagine creating the most dissonance humanly possible with the aid of electronics, crying, maybe animals and sometimes instruments or even the occasional singing and somehow artfully compile it in a fashion that people WANT to listen to it. That's them. But good.

(Oh, and also the lyrics do not make sense. I believe this is probably because they are really deep and I am stupid.)

And not only do people want to listen to Surfer Rosa, but their record sales show that over 500,000 people wanted to do so enough to even purchase it. That is almost half a million! And we know with the advent of the Internet, at least another million people downloaded it illegally and we know for sure that at least one guy ripped a copy of his coworker's CD.

You might recognize song number 7, called "Where Is My Mind". This is my favorite song so far because:

1) it is my favorite song so far
2) I understood some of the lyrics on this one
3) it is the song you hear at the final scene and ending credits of Fight Club, which movie I really like and
4) I realized that if Fight Club were not a 2 hour movie, but a 1 hour music CD, it would sound just like the Pixies

They are very good at what they do, I will give them that (in lieu of money, unless they ever happen to come out with another CD). I give Surfer Rosa 4 out of 5 stars. I do not know what the stars stand for, but I think that is pretty accurate.

And I will admit that even liberal, hippy, NPR listening Portlanders have some good stuff on their MP3 players. Grudgingly.
Posted by pshene at 1:44 PM