The Continuing Adventures Of Psycho The WonderDog

As it is advised in all abusive relationships, preserving some kind of evidence to show the authorities is recommended.

Thanks to the wonders of technology, I was able to use my phone and show our dog trainer a one minute video of our older Corgi running around the living room with the new puppy's teeth firmly latched around her throat, flinging around like some kind of furry, mutant necktie.

He said this was normal.

This is the same puppy who only barely and reluctantly pretends to respect our authority, because he knows we are his food supply. It's his begrudging "Give Us This Day Our Daily Kibble" prayer.

We missed a puppy training class last Saturday, because he was home recuperating from his injured leg, which everything points to being caused by flying on and off things three times his height.

When we showed back up at the regular place and time, we discovered they had rescheduled the class for bigger dogs without telling us. The gal at the desk looked at us a little perplexed that we did not psychically know they had switched class times, but said we could still join the class if we wanted to.

Play time had already started and we put Oliver down with the six other Labs who were about three times bigger than him. They were still pretty young ones and approached him with their regular, playful exuberance.

At this point, the police report states... kidding... at this point, Oliver responded with his own kind of exuberance that bordered on vile and reprehensible.

Amy and I just kept yelling, "he's not our dog!", but nobody was falling for it.

You probably remember the cartoon character Taz, the Tasmanian devil. When rushed by the other dogs, Oliver acted similarly, but spinning a lot faster and with a much more gravely voice. (He's 5 months old and his voice is already deeper than mine).

He then proceeded to chase all 6 Labs to their respective parents who looked at us like we just unleashed a rabid wolverine upon their little darlings. At the time, I told the dog trainer that Oliver sounded a little like a demon possessed T-Rex / Wolf hybrid.

He said this was normal.

I asked what "not normal" might look and sound like, so we could keep an eye out for it.

I know Corgis are from Wales, but Oliver reminds me of a short, drunk Scot who is so self conscious of his height, he spends his life getting into fistfights. 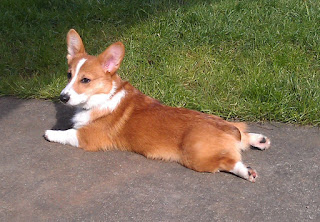 "Hey, look at me! I'm a cute, normal puppy!"FALSE.Do not approach. Call authorities immediately.
Today he decided to unleash some more of his exuberance on the world by rushing to the neighbor's fence and at their yipping, yapping, completely naive and in for a surprise rat-breed of some kind. The kind with little bows. A small meal for a rabid wolverine.

When Oliver discovered he could not rip the wood planks right off the fence, he tried burrowing next. So, we set up a doggie fence further up the yard, so he could not even get to the neighbor's fence. This modular doggie fence / pen has served us well for years with Chloe, our normal Corgi.

But like the Velociraptors who never hit the same part of the electric fence twice in Jurassic Park, Oliver set about to negate this so called doggie fence with this frightening precision and strategy:

1) First, he hit the doggie fence full force with all of his massive 12 pound frame. This somehow magically knocked it over for the first time in 4 years and he was back to trying to rip planks off of the wood one.

2) Next, he hit the now reinforced doggie fence full force with all of his massive 11.5 pound frame (calories burned). It did not fall over, but was skewed enough to now burrow under, which he did. We immediately covered Chloe's eyes and rushed her inside, because this had never occurred to her in 4 years to ever try herself and we did not want Oliver giving her ideas.

3) Lastly, Oliver rushed the now steel and titanium plate reinforced doggie fence and suddenly revealed that he never meant to hit it in his previous attempts. What happened next is hazy and reports vary, but the word "flying" was used more than once.

Oliver is 9 inches tall and the now obviously useless doggie fence is about 2 feet tall. We theorize that he might have cleared his body and then clipped the top with his feet, but we're not sure. This would account for making it over the top and landing on his back, though.

Amy asked if I thought sedatives would work and if so, how many should she take.

But as humans, we are much smarter than these common beasts and I assured her that the quickest solution is to just simply ask the neighbors how much money will it take to get them to move.

In a few weeks, Oliver goes in to get "fixed". (God, I hope that *I* never get that broken.) We'll see if that takes some of the wind out of his sails. Or Red Bull out of his wings or whatever.

I hate to imagine paying lots of money for an electric fence, just to admit "Clever Boy" when he finally gets passed it and we end up finding a cute little doggie bow in his next poop.