Thumb Wrestling With Your Teeth


Amy and I found out today that with a little preparation and careful planning, giving your 5 month old puppy his prescription medicine is barely any more difficult or stressful than the Cuban Missile Crisis.

Oliver originally only needed medicine for a cold, until Friday night. That is when he was enjoying the regular daily display of his superpower of leaping 5 feet through the air, straight onto the 3 foot high couch back, spin midair, somehow without touching down, and back onto the floor.

That might not seem terribly impressive for a lesser animal, like a cat, but Corgis are the unwieldy tractor trailers of the canine world.

He is only a foot long (hot dog joke goes here) and 9 inches tall. I am not great at math, but I am pretty sure that is the equivalent of me taking a running leap onto the roof of my house and back down.

Our son Austin used to jump off things twice his size when he was a kid. (Admittedly at 5 years, not 5 months) and had similar results.

Little ones must spread their wings and fly at this age, as a time honored passage where mother nature gently teaches them how to really hurt themselves.

Austin had 3 separate casts by the age of 6 (yes, they let us keep him) and Oliver had his first x-rays last night.

His mild limp from Friday night progressed to the point he could not walk and finally screamed out in pain while he was trying to lay down and he wouldn't stop crying and shaking for several minutes, so they told us to come in.

Luckily the x-rays showed no broken bones or anything out of socket (Corgis are prone to hip dysplasia, but he's too young for that), so they diagnosed soft tissue injury and prescribed an anti-inflammatory, some pain medicine and not flying off of things 3 times his height. 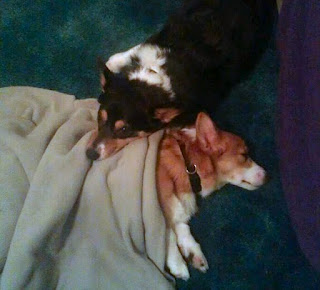 Chloe worried about her lil' bro after he went to doggie ER.
I got home about an hour ago and Amy asked if I could help give him his pain medicine, which is when we suddenly found ourselves trapped within an alternate universe "Two Stooges" movie.

First, we discovered my "healthy lifestyle changes" are compulsive and borderline OCD, when I said I didn't want to try to hide his pill in a piece of hotdog, as I loudly and uncontrollably blurted out, "they're toxic, they're poison!"

So, we tried peanut butter and after a couple unsuccessful tries, we have most of it cleaned off the cupboards, stove and front window.

I was CLEARLY told my job was to hold him like a baby and cradle him while she made sure that he magically projectile spewed the pill from the back of his throat onto the front of the fridge.

But when that failed (succeeded) 3 times, my cradling him like I was CLEARLY told to do was suddenly now "wrong". I am not pointing fingers or naming names, but it was another individual in my marriage other than me.

After one more try with him less upside down, and holding his mouth shut, he finally swallowed it.

And that finally allowed us to search once more for the original missing white pill, which somehow completely vanished before our eyes onto the white linoleum.

We eventually discovered that the mostly dissolved pill did in fact disappear off the floor, having completely splattered on my shoe, now making it the most disgusting thing by far to land on my work dress shoe, presumably until Oliver figures out a way to poop on it. While running passed and laughing, I'm sure.

So now we are trying to follow the doctors orders (Rx: Twice a day, somehow stick the genie BACK into the bottle) by not letting him run or rough house too much. But he has not gotten to play with Chloe at all for two whole days, so I just now gave them a few minutes to play gently.

Gently was rapidly upgraded to NOT gently, so I didn't let it go too long. I don't know if other dogs do this, but Chloe and Oliver have an adorable game they play that is just like one of our popular human kids games.

It is called "thumb wrestling", where the winner pins the loser's thumb (neck) with his own thumb (teeth).

And I am way less concerned with the Wild Kingdom overtones as much as I am with a 13 pound dog who could barely walk on three legs 12 hours ago always pinning the 30 pound one.

He seems to be perking back up a bit.
Posted by pshene at 4:36 PM