Kicking It Old School With Mario


I am never one to brag, as everyone totally knows, but I personally invented and manufactured a super cool, portable gaming system this week.

Oh, and it is able to plug into any computer in the world to let you instantly play them. Did I already mention that? Yeah.

I say "invented and manufactured", but I had a tiny bit of assistance from my friend Joseph.

I did the much more technical and labor intensive steps, like buying the parts he told me to. I reluctantly allowed him do some of the more menial tasks, like soldering the circuit board to the doo-hickies and knowing what the hell he was doing.

I also put myself in charge of the obviously hardest and most critical job of taking pictures of the process between bouts of pacing to the other side of the room and muttering while his soldering iron heated up.

The reason I built this with his almost negligible help is because as soon as I saw his prototype and played a couple old Mario games, I instantly knew I would not mind having one (needed one or would die).

I have not told Joseph yet, but we will totally make one for anyone that asks us for just $300 or $400 each. Call me.

But since Joseph himself actually came up with the idea and steps to build this, having made one for himself first, he warned me not to reveal his patented secret of connecting a USB Nintendo controller circuit board to a mini USB hub and mini 4GB USB flash drive that has every Nintendo game ROM copied on it, which I assured him I was not stupid enough to let slip.

I assured him the photos would be for our eyes only and you are the first to get a sneak peek! 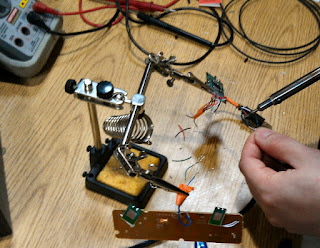 This is the first USB Nintendo controller we bought that had a dead circuit board.
We were very careful to not test it before ripping it apart and spending an hour soldering stuff to it.
I kept asking Joseph how long he had owned his soldering iron, clip stand and circuit tester thingy. I pictured a 2nd grade version of him with thick glasses, held together with tape in the middle, as he was soldering his action figures heads together.

But he kept assuring me with vague responses that he has only had it "a couple years or so". I am sure he's telling me the truth and will still totally ask his mom the next time I see her. 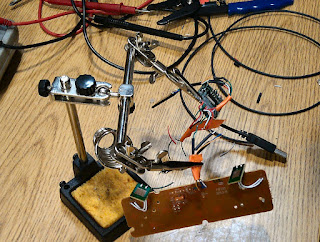 The mini USB hub, after many minutes or hours, FINALLY soldered to the dead circuit board that was a wonderful loss of $10. 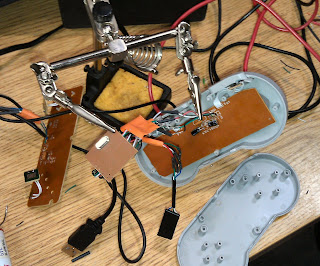 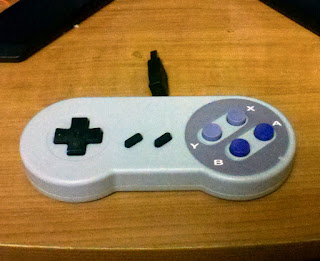 My Creation*. Made with brawn and steel.

(*With minimal help from Joseph) 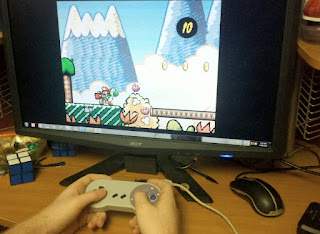 After test playing a couple games, I brought it home to Austin and let him know how I had selflessly shelled out lots of my hard earned money and then had to use my massive arms to frighten and coerce a friend to make it. JUST FOR HIM.

I am never one to brag, as everyone totally knows, but I came off pretty awesome.

And of course, by employing the time honored tradition of male gift giving, I now have the dual benefit of giving Austin one of the coolest presents he's gotten, while I can borrow it every other day and forget to bring it back!

Now I just need to go over Joseph's house to help him with a server he's having trouble with. I guess that seems like a fair trade for letting him help me build this cool toy.
Posted by pshene at 9:05 AM