Who's In Charge Here?


I keep forgetting to not seek out new reasons to look and feel old, so I am constantly hounding Brittany and Austin to hurry up and produce me cute grandkids to spoil and send back home to them.

Amy's much more thought out and reasonable reply to me on this one is, "shut up".

Tired of waiting for an excuse to get up every two hours in the night, we went out and bought a puppy.

When we first met him at the adoption agency, we knew right away that his more laid back personality would be a perfect match for our first Corgi, Chloe

We found out afterwards that this was because it was not his real personality.

Exhausted for 6 straight hours by much less deserving couples, by the time Amy and I arrived, his real personality was safely hidden away from his future parents and their desire to open up their hearts (wallets). 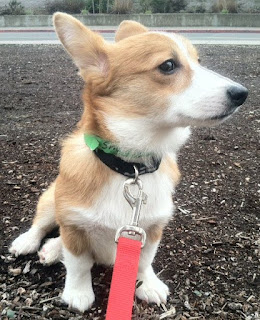 Perfect example of Oliver pretending to be normal and not criminally insane
Chloe and Oliver have a game they play, where he gets her to chase him, growling and barking full blast around the house for a few minutes. If Oliver could speak, he would call this "pretend I am not in charge".

Since Corgis have only bodies with feet and not legs like real dogs, their top speed is only about 65 mph.

After a few minutes of this, Oliver will stop suddenly, growl and bark back at this menacing behemoth 3 times his size and Chloe is rudely brought back to reality. This is his way of saying, "let's get back to the topic of me taking over everything in the world, starting with your house".

The literature assures us that they will acclimate a lot more after another week or two.

Who knows, after two weeks, we hope to even see - assuming Oliver has not eaten them - where the cats have magically disappeared to.

I am joking of course.

I totally hope he ate them.
Posted by pshene at 4:45 PM